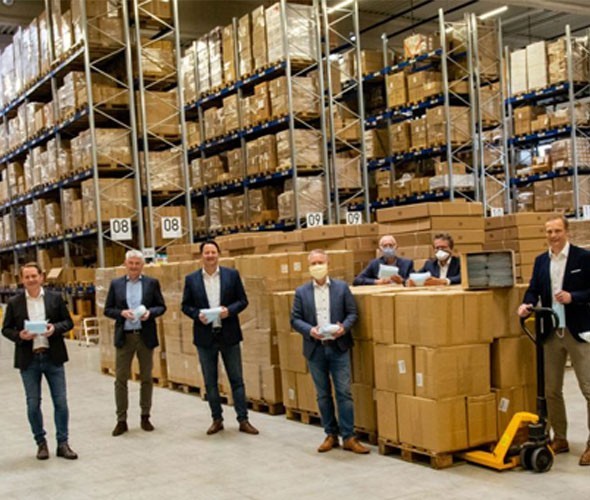 200,000 PROTECTIVE MASKS FOR THE OSNABRÜCKER LAND

The first district councilor Bärbel Rosensträter thanked him for this commitment: "We are very grateful to Björn Schütte for using his good business relationships for the benefit of the people in the Osnabrück region and also for foregoing economic profit." In addition to the procurement of the masks The company also involved seven municipalities from the Osnabrück district. 100,000 of the so-called KN95 masks, a mouth-nose covering that essentially corresponds to the European FFP2 standard, have already been delivered from China to Wallenhorst. Another delivery of the same amount is on its way from Frankfurt Airport. The municipalities of Wallenhorst, Belm, Bissendorf, Bad Laer and Hilter, the cities of Melle and Bramsche and Franz Joseph Schütte GmbH had organized the order together. The mayors of the municipalities involved, the first district councilor Bärbel Rosensträter and entrepreneur Björn Schütte now inspected the goods on site.

"As I noticed at the beginning of April that the supply situation, particularly for FFP2 masks, is very difficult, I asked Björn Schütte whether he had the opportunity to make a larger delivery possible," said Wallenhorst Mayor Otto Steinkamp, ​​who described the good business relationships of the local Sanitary wholesaler were known to China. Schütte had agreed and in a very short time an order volume of 100,000 masks had been agreed with his counterparts from the town halls in Melle, Bramsche, Belm, Bissendorf, Bad Laer and Hilter. "Then the district of Osnabrück was also brought on board and the quantity doubled to 200,000," said Steinkamp.

The aim of the campaign is to be able to make an offer in particular to the care facilities on site. Should there be bottlenecks in other municipalities, of course they will help out across municipalities, the mayors involved agree.

Helping him straightforward is a matter of course for him, says the Wallenhorster entrepreneur Schütte: “When Otto Steinkamp explained the problem and the sometimes dramatic situation in care facilities, I immediately agreed to support. We live in a community of solidarity, where you help each other if you can. ”Schütte further emphasizes that he does not earn money on the goods, but only trades them“ pro bono ”. "I don't want to make money from other people's hardships." In the meantime, Franz Joseph Schütte GmbH has even organized and delivered around 350,000 simple protective masks for the Osnabrück district.